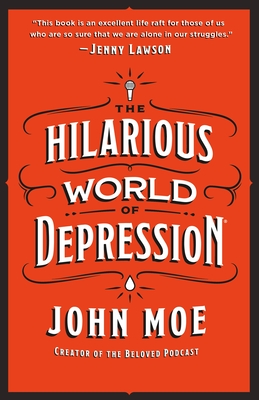 The Hilarious World of Depression by John Moe is the radio personality’s first foray into writing. Part memoir, part self-help, Moe’s book combines real-life experience with a sort of analysis of the knowledge gained from that experience.

Moe tells not only his own story in The Hilarious World of Depression, but the stories of his family and a slew of famous people who have been featured on his podcast by the same title. Moe delves into the topic of depression and how it has affected him, his family, and others head-on with comedy as his sidekick. One of the repeated themes in the memoir is how humor has been used for generations to combat trauma. Moe interviews a variety of comedians who have suffered from depression and finds solace in the traits, ideas, and experiences that they all share.

Aside from the relationship between humor and depression, The Hilarious World of Depression also covers topics of intergenerational trauma, micro-traumas, suicide, and more. Reading the book, one gets the sense that for much of his life, Moe was actually fairly well off. But that’s part of his point: depression doesn’t care if your life is middle-class, mediocre, or actually going pretty well. Later, when Moe’s own brother is claimed by suicide, Moe delves into the effect external circumstances can have on an already inherently challenged mindset.

The Hilarious World of Depression is a book that explores important, often undiscussed topics with ease and a healthy dose of humor.

Slated for release by St. Martin’s Press on May 5, 2020, you can preorder a copy of The Hilarious World of Depression by John Moe from your local independent bookstore.