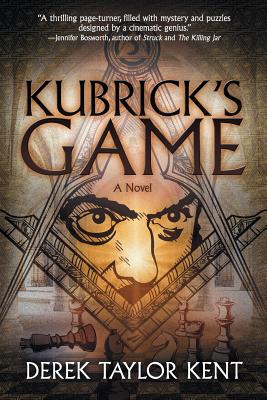 Kubrick’s Game by Derek Taylor Kent is exactly what it sounds like: a book about a game about Stanley Kubrick. From conspiracy theories to movie trivia, Kent brings it all together in this fun and thrilling novel.

The main characters of the book are Shawn, Sami, and Wilson. All of them are film students at UCLA, but each of them has a unique perspective on the world and together makes them the ultimate team to solve a game developed by and based on Stanley Kubrick. Shawn, an autistic twenty-year-old is the ringleader of the gang, acting as the quintessential anti-hero: flawed but ingenious. Sami is Shawn’s disinterested love interest with an eye for movie making unlike anyone else at school. And finally Wilson, is a burned out child star trying to reclaim his fame through directing.

The three friends discover Kubrick’s game through an initial clue directly from the deceased Kubrick involving the film Lolita. After they discover the game is not a hoax, and Kubrick actually left behind clues in his movies for a future generation, the trio is suddenly thrown into an adventure that ends up being much more harrowing than any of them ever expected. The clues become harder as the stakes become greater, and soon, the trio find themselves up against some very scary people: most of them dressed in black suits.

Kent covers all the major bases in this coming of age novel, from friendship and romance to betrayal and self-discovery. Each character undergoes a major transition, and all of the young character have morals and values that make them good role models for young readers.

Though Kent’s head hopping can at times become distracting, overall, the writing of the book matches the fast-paced and engaging plot. Everything moves quickly and at an action-packed pace, yet the characters are still dynamic and the setting is always captivating.

Kubrick’s Game is a fun, mind-boggling book that forces readers to think and problem solve right along with Shawn, Sami, and Wilson. The parts of the book that discuss movies the reader has actually seen might be more enjoyable and engaging for the reader, but the book can also inspire the reader to watch all the films they haven’t seen.

Exciting, inspiring, and an overall feel good read, Kubrick’s Game is the perfect book for any Kubrick fan or film buff, but it is enjoyable for the common reader as well.

Published by Evolved Publishing LLC in 2016, Kubrick’s Game is available for purchase at your local bookstore.