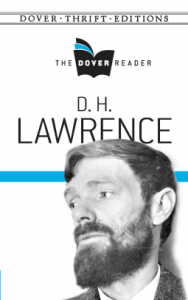 Dover Thrift released the newest collection of D.H. Lawrence’s most prominent work in January of 2015 entitled D.H. Lawrence The Dover Reader. The compilation includes his full length novel: Sons and Lovers as well as a variety of short stories, poems and a work of nonfiction entitled Psychoanalysis and the Unconscious.

Lawrence, known in his time for the perverse and, often, sexual nature of his writing incurred the descriptor of scandalous throughout his life. He is best known for his novel Lady Chatterley’s Lover, though his other works of fiction, poetry, and nonfiction have come to receive great acclaim as well.

In this Dover Thrift Edition of D.H. Lawrence’s work, The Prussian Officer, published in 1914, is a pointed example of the scandalous themes and ideas that led Lawrence’s work to be banned throughout the world. The short story focuses on a military captain who has sexual feelings for his orderly, and treats him monstrously out of jealousy for the orderly’s relationship with his girlfriend, as well as out of spite and anger for the captain’s own feelings. An exemplar of Lawrence’s work, the story ends in revenge, tragedy and irony.

In his poem Snake, published in 1920, Lawrence moves on to discuss social and religious ideas. Delving into matters of social class, Lawrence focuses on the lack of reverence those in the upper echelon of society have for those in the middle and low classes. Those below, though, tend to look upon those above like gods, and Snake is a stark outcry against this perpetuated a system. Lawrence further draws in religious imagery to illustrate the eternal battle between good and evil that pervades existence from the Bible to our current state.

Finally, Lawrence’s Psychoanalysis and the Unconscious, first published in 1921, is actually a critique of Freudian as well as contemporary scientific theory on the nature of sex. A fundamental work for understanding Lawrence’s philosophy and the backdrop for much of his fictional work, Psychoanalysis and the Unconscious is a perfect conclusion to the Dover Thrift Edition.

You can pick up a copy from your local bookstore today.