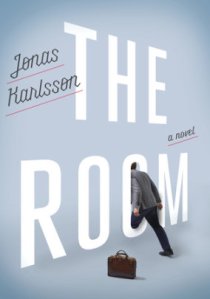 A gut bursting novella that reads like a tragicomic production, The Room by Jonas Karlsson is smart, hilarious and such a quick read that you’ll want to start it over again as soon as you hit the last sentence. The 186 page, 8 ½  x 6 ½ inch novelette is packed with irony and hilarity in its apt portrayal of the mundane and inane nature of office life as well as the many formulaic characters that reside there.

Björn has recently acquired a job working for the Authority, an organization with phantoms for leaders referred to only by their initials. These “leaders” send down numbered (never named) reports to the lowly office workers who in turn have no idea what those reports are about. Björn is hired as a sort of administrative assistant, and he takes his job extremely seriously. However, he is determined to move to the top, mostly at other people’s expense. His office mates are awkward, sometimes cruel and entirely suspicious of Björn, and he treats them no differently, though he often tries to say that he does. The unreliability of the narrator here is stark, though we can never be sure what the truth is behind Björn’s or his office mates’ distorted perceptions of reality, we can be sure that something is amiss.

To illuminate this point, Karlsson brings into the story “the room:” a small space in the office, right beside the bathroom where Björn gets most of his work done, but that those around him doubt the very veracity of. Björn must assert his rights to the room by proving that it aids him in his work, but even this does not keep his coworkers from thinking he is crazy.

Among the many themes Karlsson addresses, the idea of conformity and the erasure of individuality are paramount. Amidst all of Björn’s ridiculous antics and highbrow, self-serving thoughts and actions, there is the desire, the human need, to be a self and not just a member of the herd which is admirable in his character. Björn as well as his coworkers tend more to the side of despicable and annoying, yet each character holds a certain quality that is recognizable and relatable either within oneself or within another. These qualities might not be what we want to see in ourselves and others, but they are truths that are unavoidable.

At times highly frustrating and at other times laugh out loud funny, Jonas Karlsson’s The Room is a hilarious and light yet profound read that will keep you on your toes and make you think deeply about the state of human affairs in contemporary urban life.

The Room by Jonas Karlsson will be released by Hogarth on Tuesday, June 9, 2015. Preorder a copy from your local bookstore today.