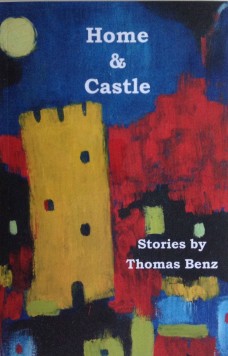 Home & Castle by Thomas Benz is a collection of short stories that take on questions like “why me,” “how bad can it get,” and “is this really what my life has become?” At least these were the questions that constantly bounded back and forth between the pages as Benz’s characters floundered their way through the lives that had become something other than what they had imagined for themselves.

Nobody in Home & Castle is an extraordinary person, or even a kind person for that matter. They are flawed in ways that many humans are, imperfect in ways that sometimes make you hate them or want their wives to find out their schemes. Yet, despite their imperfections, Benz has a way of drawing the reader into these flawed, sometimes twisted fantasies of the often-misogynistic characters in an attempt to unravel their minds just a little bit.

In one of the strongest stories, The Casual Imposter, we meet Blake, an average Joe who is always mistaken for another average Joe. Nearly everywhere he goes, he’s met by some stranger who thinks he’s someone else. As Blake begins to feel more and more invisible as himself, he also begins to gain a confidence, or maybe a self-consciousness, that encourages him to play along with what he feels like is a trick the world is playing on him. Blake decides to be the person he is mistake for, which he thinks might “be the key to breaking the curse.” After episodes of anxiety, nearly giving himself away, and ruining the reputation of the man he’s pretending to be with his own dreams of cheating, Blake gives the sham up only to meet the ultimate irony of all: someone he cares about can’t recognize him.

In the title story Home & Castle, we meet Drew, a middle-aged, once popular, wealthy, and well-to do man who has lost it all. Suddenly, he finds himself, the stay-at-home dad while his wife thrives along beside him. This kills Drew because he can’t stand the role reversal of our gendered society. Drew, at first a pitiful character, starts to become someone the reader herself feels embarrassed by. This embarrassment, Benz reminds us, though, is only the function of what society labels “normal” or even “acceptable.”

Benz’s writing is a lyrical wave of softness that washes over the reader, slowly, sometimes sleepily, and the stories begin to feel less read and more felt or almost experienced. Benz’s writing is refined, funny, and often sarcastic in a perfectly resonating way. By no means a speed read, Home & Castle is a beautiful collection nonetheless.

Home & Castle was published by Snake Nation Press in January of 2018. You can purchase a copy of Home & Castle by Thomas Benz at Indie Lit.

Read more reviews of books published by small presses at Centered on Books.