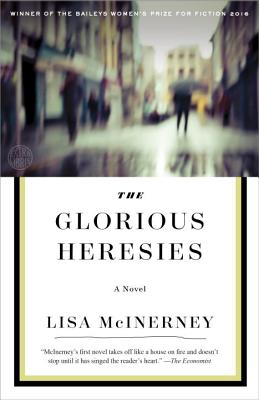 At first, McInerney’s novel seems to be a collection of oddly, unrelated storylines. You have Maureen, an older woman who has apparently committed murder. Then you have Ryan, a fifteen-year-old boy that at first just seems to have an infatuation with a girl, but that we quickly learn also has an active history of drug dealing. There’s Tony who cleans up the murder Maureen committed, and Jimmy, the thug of all thugs. Finally, there’s Georgie, a runaway teen turned prostitute who is in an addictive relationship with her pimp.

Following these characters for the first thirty pages it seems like there’s no connection between their narratives, until the weavings of McInerney’s words begin to hold together in a way the reader at first hardly realizes. Suddenly, murderers become mothers, and cleaners become fathers, drug dealers become sons, and the murdered go from the unknown to an intimate, sometime-acquaintance in the memory of a single character’s mind.

McInerney’s prose is more than poetic, it brings an otherworldly sense of beauty, charisma, and depth to a text already imbued with powerful content. A book that starts off a bit slow, somehow picks up enough speed to careen the reader through years of the characters’ lives, until the end of the novel, when you’re relieved to learn, the sequel The Blood Miracles was released in April of 2017.