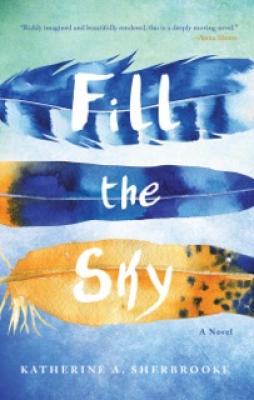 A story about the battle of fate versus volition, about western versus eastern medicine, and most importantly about the expected versus desired roles of a woman, Fill the Sky by Katherine A. Sherbrooke is an exploratory novel that is both moving and riveting.

Sherbrooke tells the story of three middle aged friends: Tess, Joline and Ellie, who have embarked on a mission to Ecuador, a mission to save Ellie from cancer. A firm believer in eastern and traditional medicine, Joline convinces her two best friends to join her on a tour of the most renowned shamans of Ecuador. The women hope that one of these shamans might be able to save Ellie in this last stand against a cancer that can’t be fought back by western medicine.

Meanwhile, Joline is also working with a multi-million-dollar tycoon to open a retreat center in Ecuador for which she left her job and any way out of the business deal. Tess has just been proposed to by a man who she thinks she loves, but who she is angry with for even proposing in the first place. Tess doesn’t believe in marriage, shouldn’t Parker, her lover, understand that? Ellie, despite fighting a cancer that has recently come out of remission, is also harboring a secret that could alter the course of not only her friendships, especially with Joline, but the foundation of her family, if she lives.

The women meet a number of different local shamans, some who put guinea pigs on them, some who give them psychotropic drugs, and all the way they waver between doubt and surety concerning these approaches. How could these “untraditional” methods really help? Is Ellie make a last, desperate, maybe stupid, stand against something she can’t control? Or, are the alternative methods of medicine, as compared to the traditional western methods Ellie is used to, actually working? The shamans seem to know things they shouldn’t, people have shared visions, miracles are witnessed…or are they all coincidences? Luck? These questions are left up to the reader to ponder as the women too are left without answers.

Sherbrooke does an amazing job of capturing the conflicting roles of women in society: roles of being a professional, mother, wife and lover to name a few. Throughout Fill the Sky, each of the women is confronted with something that conflicts with one of her major roles, and she has to decide which role is most important to her in that moment. Sherbrooke seems to suggest that the multiplicity of these roles will never diminish for women. However, despite the fact that a number of these roles come from outside sources of pressure and expectation, it is ultimately up to the woman to decide which path she wants to follow, which role she wants to assume. There is always sacrifice, but perhaps that’s not a bad thing.

Fill the Sky will be released by SixOneSeven Books on October 20, 2016, but is available for preorder at your local bookstore.