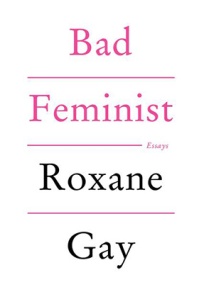 Bad Feminist by Roxane Gay is a collection of essays that explores topics of race, gender, politics, feminism and the ambiguities inherent in the world despite these categorizations. Perhaps most importantly, though, Bad Feminist is the amassed thoughts of one self-proclaimed “bad feminist:” an influential and conscientious woman provoking her readers to think differently about any number of uncomfortable subject matters.

Gay talks about what many people ignore, bury, or flat out deny in a way that is not only engaging but also relatable. She discusses and problematizes issues surrounding rape, what it means to be overweight, and women’s reproductive rights all while tying in examples from her personal life as well as from popular culture. Gay also addresses the preconceived notions of feminism and disputes the long standing idea that all women who are feminists are militant man haters.

Despite the fact that some of Gay’s attributes may seem to conflict with common conceptions of feminism, she still loves the color pink, dreams of love, and freely admits that she “enjoy[s] fairy tales.” This does not mean that she is ignorant to the complicated issues bound up in the traditional fairy tale model. The overly confident Prince Charming and the often complicit and inert female characters are still problematic, and Gay recognizes and addresses these issues in her own work.

Gay explains how in her novel An Untamed State, she endeavors to tell the typical fairy tale story in reverse, going from a state of happiness to a state of terror, to some sort of return. Gay has “no problem with darkness, sorrow, pain, or unhappiness,” but she strives to “complicate these themes…[to] achieve a more complete, complex understanding of happiness ” even in a story involving kidnapping, rape and the shaking of human morality.

Perhaps the most rattling of Gay’s musings revolves around sexual violence. Gay acknowledges that “we talk about rape, but” she notes “we don’t carefully talk about rape.” Rape victims are often further victimized by others besides the perpetrator, terms like “rape culture” are thrown around carelessly, and society engages in humor associated with rape and sexual violence. Gay confesses, that she is exhausted even talking about the topic. However, she “consider[s] her responsibility as a writer…to critique rape culture intelligently and illuminate the realities of sexual violence without exploiting the subject.”

In moments of raw humanity, Gay questions whether she is in fact “contributing to the cultural numbness” that allows, invites and encourages the ignorant ideologies about race, women, rape and other topics to flourish. But as Gay notes, she “would rather be a bad feminist, than no feminist at all.” Taking action is vital, but Gay suggest that accepting ambiguity and allowing for imperfections in one’s self and in one’s culture is perhaps even more vital. With Bad Feminist, Gay makes clear that nothing is clean cut, few things are unambiguous, and everything is complicated.